Order from Amazon
To order from publisher 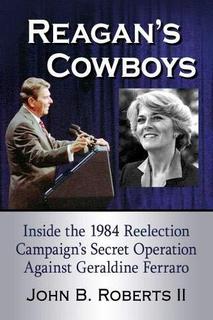 When rumors about Geraldine Ferraro reached Nancy Reagan during the 1984 presidential campaign, a secret operation was launched to investigate America’s first female Democratic vice-presidential candidate. Written by a Reagan-Bush ’84 insider responsible for running the operation, this is a first-person account of how the campaign investigated and exposed organized crime connections with Geraldine Ferraro, her husband John Zaccaro, and dating back a generation to the couple’s parents. This is the never-before-told story of how the Reagan-Bush ‘84 campaign secretly kept organized crime out of the White House.

Rating the First Ladies probes beneath the public images to portray the powerful, yet very human, women of the presidency. From the top-ranked Eleanor Roosevelt to last-placed Mary Lincoln, Roberts looks at the way each First Lady has used her unelected power to shape her husband's administration and political destiny, further his causes, and sometimes promote her own. Roberts shows them as ambitious, ambivalent, idealistic, greedy, egotistical, and selfless, in biographical essays that make for compelling and surprising reading.

"Former Reagan strategist Roberts and journalist Elizabeth Roberts draw on unprecedented access to the Dalai Lama's circle and U.S. government insiders to recount Tibet's resistance movement and its unlikely allies. Featuring recently declassified information, the book reveals the extent to which the CIA was involved in the Dalai Lama's flight into exile in northern India and in arming and training the Tibetan military resistance movement. During the cold war, the U.S. government regarded Tibet as another front from which to fend off the threat of global communism and spent millions on military and propaganda operations the authors term the “Himalayan Bay of Pigs.” After the Sino-Soviet split, the U.S. shifted its attention to the war in Vietnam and the cause of Tibet's human rights was embraced by the U.S. counterculture and, later, academics and Hollywood celebrities. The authors argue that Tibet's only hope lies in global economic divestment and boycotts against the Chinese government, actions that were effective in urging the end of apartheid in South Africa. Despite its somewhat simplistic solutions, this book offers a clear overview of the key issues and conveys why Tibet's situation is more urgent that ever."